Often described as the “mad scientists” at agencies and big companies, creative technologists are perhaps more fittingly viewed as heroes in the twists and turns of ambitious creative projects.

Do you remember the movie Speed? You know, Keanu Reeves and Sandra Bullock and the bus that can’t go under 50 miles per hour?

The day-to-day of the Creative Technologist looks a lot like Speed. You’re racing to solve an entirely strange problem with an all-or-nothing deadline fast approaching and the knowledge that the wrong series of missteps will mean disaster for the whole project.

And there’s this thing that happens at least twice in the movie. The “safe” route our heroes are on ends up not being completely constructed. It’s why the iconic bus-with-a-bomb has to do this:

This is the experience of the Creative Technologist: Driving creative solutions down roads that aren’t even finished yet.

And nailing the landing.

Rather than trying to push the gas too far on this analogy, we recently gathered experts from across the creative technology field to discuss the state of the role and its changing gears. They represent experience over the full span of environments from small teams to global corporations, all doing their best Keanu to create transformative experiences. 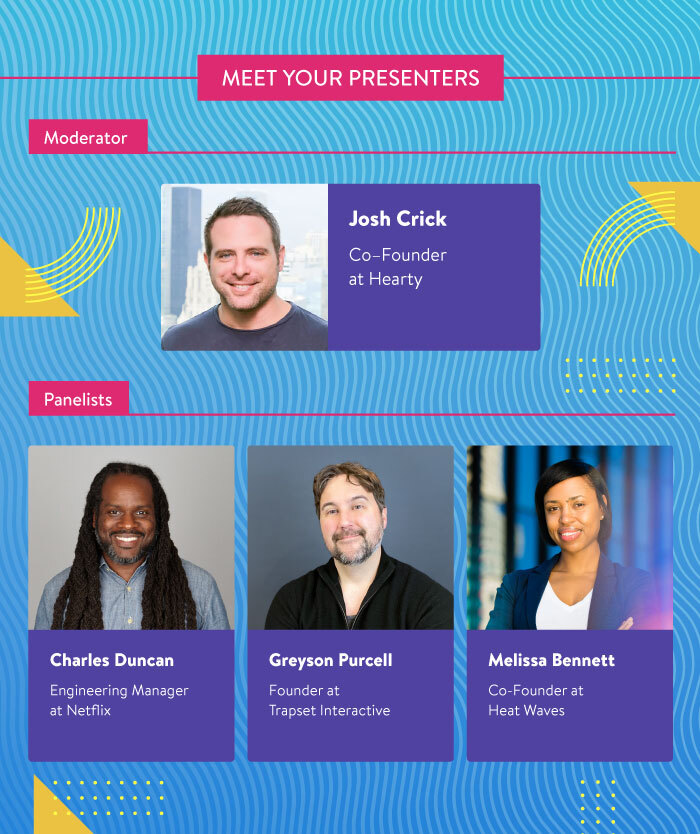 Here’s what they told our audience of designers, developers, and other folks from the creative industry.

How Do You Define the Creative Technologist Role?

Despite the ever-changing practicalities of their roles in creative technology, the panel hit a chord on the foundations of the role.

Creative and technology working together. It’s problem solving on both ends. It’s mashing those two together and delivering experiences that users love.

Seeing what’s out there, understanding it, and knowing what works best in what situations … and knowing that tomorrow there’s going to be 200 more things on that table.

Bringing magical ideas to life. It can be about brand awareness, about interactivity, or solutions to these challenging times that we’ve been in. All of these things potentially have creative solutions.

At the root of all three answers? Creative technologists are solvers, pulling methods from across industries and disciplines to achieve ambitious goals.

Where Does a Creative Technologist Fit Into the Process?

Because of the nature of what they do, creative technologists provide the most impact when incorporated throughout the duration of a process.

I’ve worked in situations where the creative tech team is at the very end. They’re treated as a toolbox, which I think is the incorrect method. Because, some creative groups see technicians as the people who are telling them no. And I really like when I can be in a room when the idea is being created and can say, “Well maybe that’s not possible, have you thought about this tech or this tech?”

While design is happening, while strategy is happening, tech is in the background doing all the discovery to find out what’s possible. There isn’t a situation where Design designs something, dreams it up, and says, “Here. Go build it and figure it out.” Never. It’s always from the get-go: Design and Technology and Strategy.

It’s an important reminder to collaborate rather than fall into the trap of silos.

Speaking of collaboration, our panelists all saw the overlap of people power and technical advancement as having a large impact on their work.

Collaboration. Most – if not all – these tools [we use] have a way for everybody to collaborate in real time. Especially in these times when we don’t have the opportunity to be at a white wall together, everybody can come together and collaborate no matter where you are.

The technologists coming up today through the ranks are able to bridge lots of different tooling and dabble into creativity. They make things a lot more possible than before. They’re like, “I can’t tell exactly how I’m going to figure it out, but give me a couple of days and we’re going to get there.”

You still have limits, but the things we [used to struggle with] are not a huge deal anymore. It’s just wild how we went from being cutting edge to five years later, some kid at home could download Unreal and probably pull off a similar experience … A lot of the tools to do these jobs moved out of ‘designed by engineers’ tools to being real products with real thought put into them – like, professional UX. You’re no longer fighting the technology.

Asked about how to develop a career as a Creative Technologist, the panelists all addressed the continuous evolution of skills in the field. The adaptability needed can both be a struggle and an opportunity.

You have to understand that it’s a life choice. If you go down this path, you are going to forever be learning new things. You’re forever going to be having things that go away. You just have to love it, and you have to be aware that you’re constantly going to be learning and evolving. If you’re okay with that, I think you’ll be successful.

Put a panel of 10, 20 creative technologists together and say “What’s your background?” There’s some people that come from a hardcore engineering background, or some people that went to design school. People are coming from such a diversity of background and skill sets, but still find their way. You can jump in because ultimately the tooling changes, the technologies change.

Be okay with failure. Because you will fail. That’s how you learn. You take all the learnings with you. It’s just jumping in, being curious at all times, keeping abreast of all the changes, and being willing to fail and try again until you succeed.

What’s Next for Creative Technologists?

Looking to the future of the field, the panelists expressed intrigue in AI and the continued increased capabilities of mobile devices. Be sure to watch the recording of the full panel session to hear their full takes.

We also received a question on the potential impact of deep-fake technology on the creative field.

Here at the Media Temple Blog, our contributors are digging into all these areas and more over the next couple months. So I encourage you to add us to your routine and follow along as we dive deeper into the future of creative technology.

Gain a Partner in Your Creative Projects

Media Temple’s been hosting ambitious creative projects for over two decades. And as a member of our Agency Partner Program you get elevated access to our team of experts. Find out more and apply today.

Apply these five tips to set your agency up for success as you close out the pandemic and take strides forward.

With 2020 in the books, we’re looking back with the agency community to see what worked, what didn’t, and what the future might look like.

How can women overcome inequality while juggling responsibilities during a pandemic?